Home > About > FreeStyle Blog > Testing your glucose: a look back through time 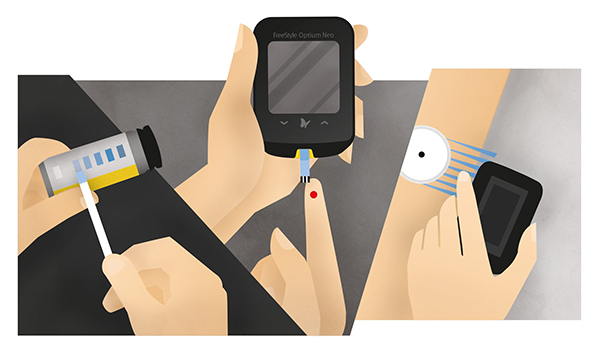 Through the past decades, evidence has steadily accumulated showing that regular monitoring of glucose levels is very important for effective diabetes management, especially if you take insulin1,2 Knowing how high (or low) your glucose levels are  guides you to take the necessary steps to manage it and thus potentially reduce the risk of serious long-term health problems1,2.

Glucose testing began as far back as 1925, when eight drops of urine were mixed in a test tube with 6 cc of Benedict’s solution and put into boiling water for five minutes1. The colour of the liquid would indicate how high the sugar content was.  The late 1940s saw a major improvement in this crude methodology with the introduction of the “dip-and-read” urine test (Clinistix), allowing instant monitoring of blood glucose levels3.

However, urine glucose testing is not perfect4. Glucose isn’t usually detectable in urine until levels have risen quite high and also the test results will reflect the glucose levels at the time the urine was produced by the kidneys, which may have been several hours previously.  Urine testing also can’t detect if glucose levels are falling too low – which is a potentially drawback5.

In the 1960s, the first strips for testing blood glucose were used6. A drop of blood was placed on the paper strip for 1 minute, and then washed off. Comparing the colour to shades on a chart provided a rough indication of blood glucose levels6.  This was often inaccurate due to interpretation of the colour, and the scene was set for the development of blood glucose monitoring devices that was driven by the lack of available consumer level self-testing products6,7.

Over the years 1978-1980 (during which, the world saw the arrival of the first test tube baby, the election of the UK’s first female Prime Minister, the assassination of John Lennon in New York and the international boycott of the Soviet Summer Olympics), people with diabetes were  (for the first time) taking home portable blood glucose monitors6.  Called the Ames Eyetone, the first home monitor weighed nearly four pounds and stood 7 inches high. It had to be plugged into mains electricity and looked like something out of an early science fiction movie. Nonetheless it gave results in one minute8.

After that, things moved quickly.  Those first bulky, cumbersome and sometimes inaccurate models improved greatly in speed, accuracy, reliability and ease of use (less invasive, less volume of blood required, no need for calibration) and also reduced in size — many are now smaller than many mobile telephones, allowing for discreet testing.

In 1975, the first commercially available glucose biosensor was launched9.  By the late 1990s / early 2000s, continuous glucose monitoring (CGM) had made its entrance10. Rather than measuring blood glucose at one particular time point, CGM (which consists of a small disposable sensor inserted just under the skin which wirelessly transmits data to a receiver) monitors glucose levels round the clock. It’s actually the glucose in your interstitial fluid (the fluid between your cells) that is sampled, so calibration with blood levels does need to be done at regular intervals.

Alongside this came Ambulatory Glucose Profile (AGP) that creates visual representations of glucose levels over time periods of choice, assisting users to become closely acquainted with their body’s typical behaviour. 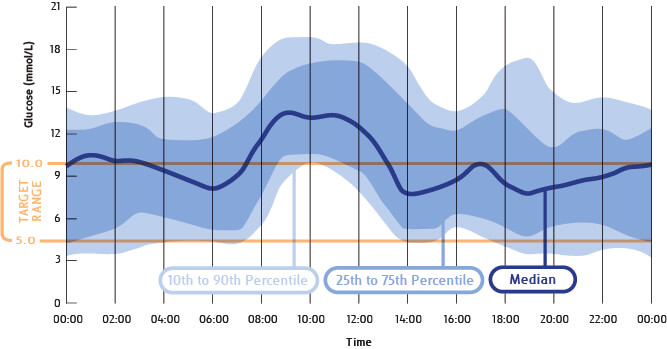 Undoubtedly there will be further refinements in glucose monitoring techniques in the coming years.  In the meantime, are you testing smart or just testing?