Disclaimer – The author’s views are entirely his own and may not reflect the views of Abbott. 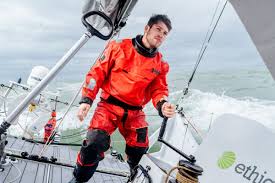 I started sailing when I was six, and for as long as I can remember I’ve been dreaming of the Vendée Globe - a nonstop, solo and unassisted around the world sailing race. I was in the early stages of my career as a sailor when I was diagnosed with type 1 diabetes, having left my course studying engineering at Oxford University to pursue the dream.

It’s obvious upon reflection, but at the time it was easy to miss the symptoms for what they were. I was competing in a three-week long, multi-stage race around the Arabian Gulf, fatigue was expected through sleep deprivation and physical exertion, while thirst and dehydration seemed normal in the high ambient temperatures. Perhaps my blurry vision should have been more of a clue!

Offshore sailing, especially solo, is a real challenge with type 1 diabetes, which generally favours routine. Picture yourself in the midst of a hurricane force depression, battling an icy 10-metre North Atlantic swell, while simultaneously fighting nausea and severe sleep deprivation. It’s a challenge to look after yourself at the best of times, let alone while your entire wellbeing relies on a boat itching to tear itself apart under its own sheer power, if you do not successfully keep the reins tight.

Since being diagnosed I have won major races, broken world records on some of the fastest sailing boats on the planet, and most recently competed in the famous ‘Route du Rhum’ single handed, transatlantic race from St Malo, France, to Guadeloupe in the Caribbean. I was not only the first person living with diabetes to complete such a race, but also the youngest competitor, and I rounded out the season championship in fourth place.

Technology is my best friend

Technology is a very important part of this - my boat is built from cutting edge composites and can hurtle down waves at record breaking speeds, whilst remaining reliable for weeks at a time in the world’s harshest environments. And while the boat gets carbon fibre, I get devices like an insulin pump and the FreeStyle Libre system.

Accurately and consistently knowing my glucose level is critical to both safety and performance. I can use the sensor when I’m drenched in water*, and the data gives me lessons from the past and insight into the future**.

I’ve now spent a significant amount of time alone, and in challenging and unpredictable environments. In many ways, managing diabetes and crossing an ocean on your own are similar. Here are my three top tips:

-I’ve learnt not to bite off too much in one go; rather focus on the next step and always keep moving in the right direction. Looking too far ahead can be overwhelming. Whereas focusing on small goals creates a sense of achievement and always helps with motivation.

-When things aren’t going perfectly to plan, I try not to be too tough on myself. We all hold ourselves to impossibly high standards at times, but a new and changing environment is not the time to do this. I use my energy to adapt, rather than beating myself up about my shortfalls.

-Finally, I’ve come to realise that isolation and loneliness are not the same thing. Even when thousands of miles from land, staying in touch with people can help you feel like you aren’t alone. Social interaction is human nature and a lot of problems can be solved when you talk about them, or simply feel supported.

Jack Trigger is a British solo offshore sailor and a FreeStyle Libre ambassador. You can follow Jack on Instagram @triggersailing and on Facebook at Trigger Racing.

“My diabetes has never stopped me”

Read how Ben Wallace has not let his Type 1…